Witchay Babay has white hair that is shoulder length, and a little bit of her hair on the left side is tied up with some more of her hair, she also has lavender purple eyes, with two face decals, one being a star and the other being a cresent moon, she wears a black sunhat, a see through shirt, a see through skirt that has stars and moons on it, and she is also wearing black and orange striped tights with black boots, along with black fingerless gloves.

In the Spooky Sparkle edition Witchay Babay wears a glittery black pilgrim dress, a black pilgrim hat, black glittery shoes with an orange platform sole decorated with crescent moons and stars, and she carries a jack-o-lantern handbag. She has white molded hair in this edition. 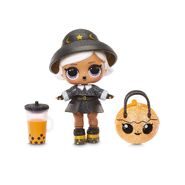