Queen Bee is one of the rare LOL from Series 1. She is part of the Glitterati club and has a lil sister named Lil Queen Bee. She also has a twin brother named King Bee and an older sister named Royal Bee. Queen Bee has a pet named is Pup Bee.

She has brown skin and medium brown eyes. Her lipstick is violet and she has very light blush. Her glittering gold hair is worn in large puffy buns, and she has short straight cut bangs. She wears a glittering gold and black striped frilly dress with black boots.

Her hair is still glittering, but here she wears a glittering black single-sleeved leotard with a wide golden belt and matching golden slip-on shoes. 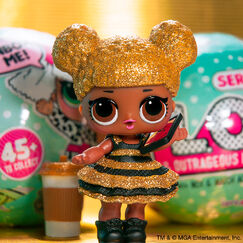 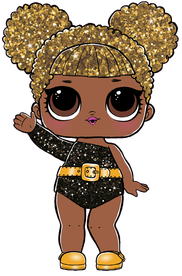 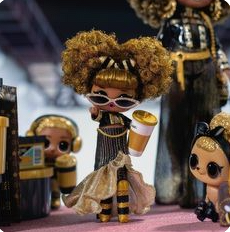