Lil Bebé Bonito is an ultra-rare lil brother from Eye Spy Series. He is a part of the Spooky Club. He is the lil brother of Bebé Bonita. He also has two pets: Bonita Burrito and Cuervo Bonito.

Lil Bebé Bonito has a red diaper, a bowtie on his chest, black hair, aqua eyes and a white paint mask on his face. He also has his tongue and arms out as well as a big sister instead of a big brother.

His diaper gets hearts on it and his hair turns lilac. 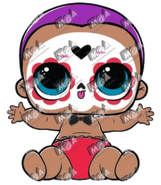