It Baby is a Fancy doll from the Glam club in series 2. She has a brother named It Boy, a lil sister and It Kitty, her pet.

She was later re-released in the Glam Glitter series.

It Baby has fair skin and dark brown eyes. Her brown hair is worn up in a multi-sectioned bun and slightly curled inward bangs with caramel streaks. She wears light pink lipstick and blush, and over her eyes are a pair of black cat-eye sunglasses. On her head is a thin white headband with a tiara made from pearls to match her necklace. She also wears a black dress with a pleat skirt, black shoes with tiny bows on the foot, and a frilly white skirt.

Her eyes have glitter and she wears an alternate pair of black sunglasses. She keeps her head accessory but it's now silver, and her hair has a metallic sheen. Her streaks are alternatively placed and glittery gold. She wears a black dress with a silver glittering shawl held by a pale blue ribbon, and black peek-toe heels with a fluffy pom-pom on the toe. 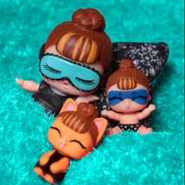 It Baby sleeping with her family.
Community content is available under CC-BY-SA unless otherwise noted.
Advertisement