Hoops MVP is a popular LOL from the series 1. She is part of Athletic club. She was later released in the Glitter Series. Hoops D.O.G.G. is her pet, Dribbles is her brother, Lil Hoops MVP is her her little sister and her older sister Hoops Cutie.

She was also released in All-Star Sports Series 6.

Hoops has tan brown skin and pink blush with electric pink lipstick. Her eyes are brown, and her black puffy hair is worn up in buns with straight cut bangs. Her outfit is composed of an orange onesie with Baby 00 written in pink, worn beneath an electric pink and white sports jacket. Her orange and white high tops are worn with white sports socks accent by two electric pink lines.

Her hair is coated in glitter and she wears a glittery white and electric pink sports T-shirt with orange writing and glittery orange short-shorts with electric pink detail. Her shoes are electric pink and orange, worn with white socks that have a rings of orange near the top. She wears a fluffy electric pink headband. 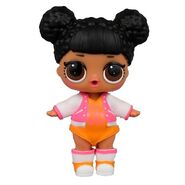 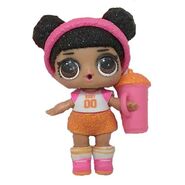