Cosmic Queen is one of the rare LOL from series 1. She is part of the Glitterati club. Her lil sister is Lil Cosmic Queen and her pet is Cosmic Rider.Her O.M.G sister is Cosmic Nova

She was re-released under the Glitter series.

Cosmic Queen has fair skin with light indigo eyes and violet lipstick. Her cheeks have faint pink blush. She has glittering turquoise hair worn in several vertical rolls with several loose curled strands. She wears a purple jumpsuit with a single sleeve and coating of glitter, accent with a silver belt and matching cowboy boots. She also wears white sunglasses with pink heart-shaped lenses.

Her hair is the same. She wears a glittering purple dress and shiny fuchsia puff shorts, paired with metallic silver moon boots and a matching geometric belt. Her sunglasses look similar to the original, but with round lenses instead of heart-shaped ones. 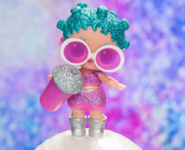