LOL Lil Outrageous Littles Wiki
Register
Don't have an account?
Sign In
Advertisement
in: A to Z, Characters, L.O.L. Surprise!,
and 15 more

Baby Cat is a character/doll introduced in Series 1 (and was also released in the O.M.G. Winter Chill line as an exclusive if you bought her big sister) and is a part of the Theater Club, which likely means she’s an actress.

Baby Cat has a brown skin-tone and green eyes.

Her hair is orange and is styled into two double/high/pigtail buns with bangs, other dolls that have this hairstyle are Teacher's Pet, Sugar, Snow Angel, and Midnight. She accessorizes her hair with orange cat ears, her outfit consists of an orange tiger costume and white boots (artwork showcases the boots having shoelaces though this detail is not included in the final version of the doll).

Her face paint includes painted on black whiskers and eyeliner.

Baby Cat keeps her brown skin-tone though her eyes are now glittery.

Her hair is orange w/ glitter and styled into the same two buns style, but she now wears a pink jersey jacket with white striped pink sleeves on top of a glittery pink tee with the letter “B” on it for Baby Cat. She now has painted pink legs with black stripes likely to give the impression of claws and white socks underneath red glittery shoes. 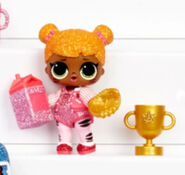